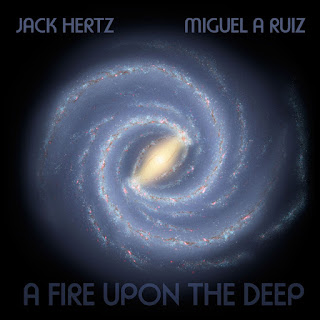 Release notes:
This recording is pays homage to Vernor Vinge's Science Fiction novel "A Fire Upon the Deep." A gripping tale of galactic war told on a cosmic scale. The novel posits that space around the Milky Way is divided into concentric layers called Zones, each being constrained by different laws of physics and each allowing for different degrees of biological and technological advancement. The innermost, the "Unthinking Depths", surrounds the galactic core and is incapable of supporting advanced life forms at all. The next layer, the "Slow Zone", is roughly equivalent to the real world in behavior and potential. Further out, the zone named the "Beyond" can support futuristic technologies such as AI and FTL travel. The outermost zone, the "Transcend", contains most of the galactic halo and is populated by incomprehensibly vast and powerful posthuman entities.
http://en.wikipedia.org/wiki/A_Fire_Upon_the_Deep

Cover Image
This artist's concept illustrates the new view of the Milky Way, along with other findings presented at the 212th American Astronomical Society meeting in St. Louis, Mo. The galaxy's two major arms (Scutum-Centaurus and Perseus) can be seen attached to the ends of a thick central bar, while the two now-demoted minor arms (Norma and Sagittarius) are less distinct and located between the major arms. The major arms consist of the highest densities of both young and old stars; the minor arms are primarily filled with gas and pockets of star-forming activity.
http://en.wikipedia.org/wiki/Milky_Way