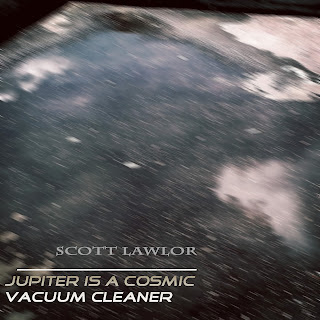 JUPITER IS A COSMIC VACUUM - this dark ambient work was inspired by an astronomical event that occurred during the week of July 16th through the 22nd, 1994, where fragments of a comet called Shoemaker Levy 9 slammed into Jupiter.

Besides my Ensoniq TS12 synthesizer, I also incorporated the sounds of Jupiter, though mangled a bit as explained a bit later.

You can find the video and audio referenced in the following description at
http://www-pw.physics.uiowa.edu/voyager/v2pws_jupiter_arrival.html
Here's some information on how these signals were recorded as taken from the above citation itself.

Voyager PWS VOYAGER-2 PWS: ARRIVAL AT JUPITER
The PWS plasma wave instrument on Voyager 2 recorded these signals as the spacecraft was approaching Jupiter on July 2, 1979, between 15:56 and 16:45 spacecraft event time (essentially UTC), near the bow shock in front of the planet's immense magnetosphere. A variety of plasma wave phenomena heralded our arrival, including Langmuir waves, ion acoustic waves, and others. These are the authentic "sounds of Jupiter" unmodified and presented at their original frequency.

The PWS wideband waveform instruments on the two Voyager spacecraft sample the electric field on the dipole wire antenna at a rate of 28800 4-bit samples per second, using an automatic gain control. Consequently, the audio is just slightly better than telephone quality. Packets of 1600 samples are acquired, separated by the equivalent of 128 missing samples. Running these packets together results in the playback taking less than real-time (by a factor of 1600 / 1728), and also introduces a slight audible flutter. The amplitudes at the edges of these packets have been smoothed to reduce this flutter, but this is the only modification to the signal.

These are by no means the only "sounds" that Jupiter makes, but there is nice variety during this hour interval. All of the available measurements during this interval are present but since there are time gaps, the total run time is approximately 27 minutes.

Some of the audible features unfortunately are the result of onboard interference. The constant tone at 2.4kHz is caused by the spacecraft power supply. The occasional sound like someone pounding a bass drum is the result of spacecraft attitude thruster firings. The sound more like thumping on an oil barrel that tends to occur about 7 seconds into each frame, but sometimes more frequently at a regular cadence, is due to a stepper motor on another instrument. The tones with harmonics that build slowly and end abruptly and appear as multiple horizontal lines in the spectrogram are due to the grid modulation of another instrument. The rest of the signals are the naturally-occurring plasma waves that this Voyager instrument was designed to detect: These are the genuine "sounds of Jupiter".

Now, what do we mean by "sounds of Jupiter"? First, the sounds are not typically produced at the planet itself, but in the magnetosphere, the magnetic bubble surrounding the planet. In this particular case, most of the signals are generated from the interaction of the supersonic solar wind colliding with the bow shock ahead of Jupiter's magnetosphere. These waves are not the same as the pressure waves in the atmosphere that we normally think of as sound. However, they do have some similarities. Even though space is an excellent vacuum, it is "filled" with particles at a density of typically a few to several hundred particles per cubic centimeter near planets. Most of these are charged and constitute what we call plasma. Being charged, these particles interact with each other without the need to "collide" as they do in the atmosphere. Moving charged particles both produce electromagnetic fields and waves and also are moved by electromagnetic fields and waves generated elsewhere. These are "plasma waves". Many of these interactions occur at frequencies that are audible to humans. This doesn't mean that a human ear could hear them in space -- the
pressures are far too small -- but it is conceivable that an ultra-sensitive microphone could measure them. In practice, however, it is far easier to measure the oscillations in the accompanying electric and magnetic fields with antennas, and that is just what we do. To produce sound we can hear, we simply do the moral equivalent of hooking our antennas up to an amplifier in order to drive speakers. Plasma waves can be considered "space audio".

The video shows a series of 48-second-wide spectrograms with an animated cursor that shows the time of the audio track. The amplitude of the signals is color coded with dark blue for the weakest and red for the strongest signals. Low frequencies are at the bottom of the plot and high frequencies are at the top. Time ranges from left to right.

Artist Info
I enjoy composing long form ambient music and broadcasting on the internet.I currently have a program on the stillstream network called The Blind Flight and you can read about it at http://theblindflight.wordpress.com/
I've had work released on the weareallghosts label at http://weareallghosts.bandcamp.com/, the dystimbria internet label at dystrimbria.cc as wel as my personal site http://scottlawlor.bandcamp.com/ and have plans to release more material throughout the year if I can.
Scott Lawlor Web