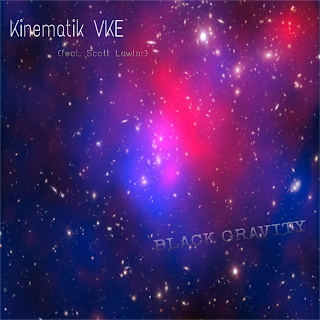 There are two prevailing concepts in astronomy; dark energy and dark matter. Dark energy is a form of energy that contributes to the increasing expansion velocity of the universe. Dark matter can not be seen directly but does have a gravitational effect on visible matter. Both of these theories can also be applied to the type of universe we exist in. Dark energy can cause it to expand indefinitely, in which case all the hydrogen in the universe will eventually run out and everything goes dark (open theory), or dark matter will be just enough to stop expansion and eventually cause all matter to collapse inward (closed and occillating universe). Black gravity is my interpretation of dark matter's gravitational effect where there is the possibility of the universe's slow fall inward.

Kinematik VKE is the artist and curator of the netlabel The Inner Cinema (archive.org/details/theinnercinema)
Scott Lawlor is an ambient artist that can be heard every week as the host of The Blind Flight on Stillstream.com

Copyright [c] 2014, Released a Creative Commons License For Free Non-Commercial Use As Long As Certain Condition Are met