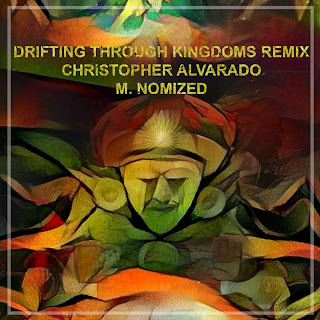 Christopher Alvarado is a multi instrumentalist who's primary methods of producing are sound manipulation, ambient and experimental music. Alvarado has been playing and performing since 1985 with diversified bands such as Twilight Transmissions, Harsh Reality, 23 Extacy, Little Sap Dungeon and a plethora of others in the blues, punk(hardcore), industrial, gothic, folk, rock, electronic and now ambient and experimental genres. You can find his work on Aural Films, Sound For Good, We Are All Ghosts, Earth Mantra, Roach Clip Records, 45 Echoes, Kalpamantra, Tree Trunk and Webbed Hand Records. Christopher Alvarado's main influences are the people he works with, writing theme based sound and mind created landscapes.
WEB:
https://www.discogs.com/artist/3378813-Christopher-Alvarado
http://675093429378322893.weebly.com/

M. NOMIZED
Real Name: Michel Madrange. Multi-talented artist from Paris, France: musician, composer, painter, puppeteer. Joining the contemporary music scene in 1975, he worked with various groups, opening up on stage for artists such as Claude Nougaro and Bernard Lavilliers.
Got involved with Indian raga and formed his own group "Dhismâ" which marked the beginning of his study of repetitive music. In 1983, he created Fraction Studio, a label dedicated to promoting and distributing musical forms without distinction, including minimalist and electro-acoustic. Since then, over 90 Cassettes/CD's under his own name or in collaboration with other artists have been produced on different independent labels around the world. Working on a concept of images and music, he continues to compose "sound environments" for art exhibitions (ex. Oslo, New York), to make new albums and to pursue his interest in the Mail-Art movement.
WEB:
https://www.discogs.com/artist/740538-MNOMIZED
https://mnomized.bandcamp.com/