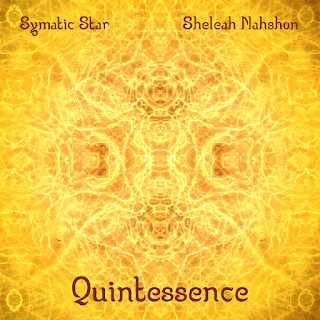 Release Note:
Quintessence is a sonic-alchemical collaboration of partners Simon
Walsh (Symatic Star) and Sheleah Nahshon, who live in the precious bio
diverse coastal forests of South Western Australia.
All of the sounds on this playful and deeply atmospheric ambient album
are made with Simon and Sheleah's voices, both raw and electronically
modulated and sculpted.

Symatic Star - AKA Simon Walsh is a composer, synthesist, sound designer and multi-instrumentalist, moved by the mysteries of the Cosmos on a micro and
macro scale, exploring new realms of electro-acoustic music.
Simon creates with a growing range of sound sources including:
synthesizers analogue and digital, experimenting in all forms of
synthesis with a strong usage of modular and granular forms. An
expanding range of electronic and acoustic instruments, raw and
processed field recordings.

Sheleah Nahshon - Sheleah is a multi media co-creative visionary artist /
starflowercreations.com inspired by Love, patterns in nature and the
mystical.
Sheleah loves the voice as an instrument and akin to her visual
photographic art is excited by the places it can be taken with
technology.