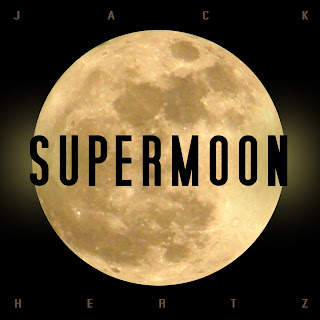 A supermoon is the coincidence of a full moon or a new moon with the closest approach the Moon makes to the Earth on its elliptical orbit, resulting in the largest apparent size of the lunar disk as seen from Earth. The technical name is the perigee-syzygy of the Earth-Moon-Sun system. The term "supermoon" is not astronomical, but originated in modern astrology.[1] The association of the Moon with both oceanic and crustal tides has led to claims that the supermoon phenomenon may be associated with increased risk of events such as earthquakes and volcanic eruptions, but the evidence of such a link is widely held to be unconvincing.

The music on this album was composed during the Supermoon on June 22-23, 2013, as the closest and largest full moon of the year and the Moon’s closest encounter with Earth for all of 2013. The music was created on the following equipment: Korg M3, Nord G2, Yamaha TG33 and Lexicon Effects.

Jack Hertz works with real and artificial sounds to create intangible techno-organic impressions between music and noise. Jack has worked with many artists over the 30 years he has been playing. He has released more than 35 albums on netlabels around the world and receives regular air play on many radio stations. More information can be found at http://jackhertz.com

Information and cover image courtesy of Wikipedia.
Cover image of the The Supermoon by Peter2006son.